This year is the 50th anniversary of Margaret Court’s remarkable achievement of winning all four grand slam tennis titles in the one year, an achievement which is to be celebrated at the Australian Open which begins on 20 January.

Her achievements in tennis are legendary. She won a record 64 Grand Slam tournament titles, including a record 24 singles titles (more than any other man or woman in history), 19 women’s doubles titles and a record 21 mixed doubles titles. She also set the record for most titles won in a single Grand Slam event, with 11 Australian Open wins, a record only surpassed by Rafael Nadal on June 9, 2019 when he won his 12th French Open title. She was the first Australian woman to win Wimbledon (in 1963).

The Margaret Court Arena at the Melbourne Tennis Centre was named in 2003 in her honour.

In 2006 she was awarded the International Tennis Federation’s highest accolade, the Philippe Chatrier Award.

In 2001 she was inducted into the Victorian Honour Roll of Women.

There is more than enough reason to celebrate Margaret Court’s achievements and she deserves to be an honoured guest at this year’s Australian Open.

Highlights from Dr. Quentin Van Meter’s presentation at the

Highlights from the launch of Patrick J. Byrne’s book,
Transgender: one shade of grey

What is the best treatment to protect the welfare of children and young people with gender dysphoria?

Cross-sex hormones – Harmless or dangerous? – impairment of decision making capacity of the brain.

Puberty blockers 1 – Harmless or dangerous? How they affect the brain and gonads.

Looking to long term health and welfare of children and young people with gender dysphoria – what is in their best interests?

Puberty blockers 2 – Harmless or dangerous? – accelerated ageing of the brain. 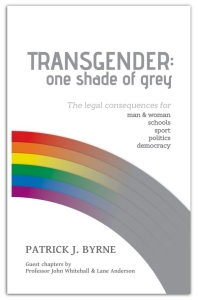 What happens if a biological man who identifies as a woman can play in women’s sports, access women’s domestic violence shelters and lesbian organisations and, if in jail, women’s prisons? Why are state education departments saying that, if a biological boy identifies as a girl, he must be allowed to use girls’ toilets, showers, change rooms and play in girls’ sports?

Patrick Byrne finds that, the more the term gender identity is examined, the more it becomes uncertain, ambiguous and contradictory and leads into deep legal and cultural conflicts. The more the transgender world view is protected in law, the more people are threatened with legal, professional and cultural sanctions if they insist on recognising the biological fact that human beings are either male or female.

At the same time, the more laws and governments insist on gender-neutral language, gender-neutral toilets and sports in the cause of “diversity”, the more we are treated uniformly, same-same, as one shade of grey.

The author critiques the assumption behind transgender world view, that there is no human nature, raising the question: if there is no common human nature, how can there be universal human rights? This book poses deep and disturbing questions about the effect of gender identity politics on ordinary people and our democracy.

TRANSGENDER: one shade of grey is a masterful critique of the transgender revolution and why the biological fact of male and female needs to be restored into law.

On Saturday, 24 August, Aurora Receptions in Brunswick was the scene of the 10th anniversary Life Dinner. About 200 people...

What happens when you decriminalise abortion?

A conversation starter for MPs and voters Politicians could be forgiven for not fully understanding the impact of legalisation they...

The AFA and Cherish Life Queensland have commissioned yet another YouGov Galaxy Poll focusing on issues specific to the wording...

MEDIA RELEASE Are the concerns expressed by ‘No’ campaigners, like Mr Abbott and Mr Latham, valid? The Australian Family Association...

Founded in 1980, the Australian Family Association is a not-for-profit, voluntary, and (non-party) political organisation which has been formed to provide a forum and a vehicle for those individuals and organisations in the community concerned with the strengthening and support of the family.

Definition of marriage and family

Fundamental to the position of the Australian Family Association are MARRIAGE as defined in the Marriage Act 1961 and the Family Law Act as ‘the union of a man and a woman to the exclusion of all others voluntarily entered into for life and the FAMILY which is composed essentially of a father, mother and children; in a wider but still necessary relationship, of grandparents, grandchildren, aunts, uncles; a kinship group of human beings linked by ties of blood, marriage and adoption, structured to bear and rear children, to care for the young, the sick and the old and other human needs.

Help us keep the family together

Stayed informed about the latest campaigns affecting your family here in Australia and actions you can take to foster a family-friendly environment. With your help, we can implement change and support the integrity and well-being of families across the nation.